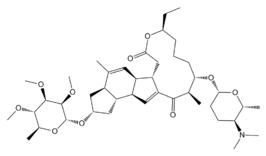 A natural alternative to toxic chemicals for your vegetable garden.

Spinosad is composed of spinosyns A and D, substances produced by aerobic fermentation of the actinomycete species Saccharopolysora spinosa. This rare species wasfound in soil samples from an island in the Caribbean in 1982. Actinomycetes are filamentous bacteria found in the soil that give it a sweet ‘healthy’ smell. Following fermentation, spinosad is extracted and processed to form a highly concentrated aqueous suspension.Spinosad is a light gray to white crystalline solid with an earthy odour.

Spinosad has a shelf life of three years as formulated material.

Spinosad is a fast-acting, somewhat broad-spectrum material that acts on the insect primarily through ingestion, or by direct contact with a spray droplet or a newly treated surface. It activates the nervous system of the insect, causing loss of muscle control, prostration with tremors, and paralysis. Continuous activation of motor neurons causes insects to die of exhaustion within 1-2 days.

Spinosad is a broad-spectrum, organic insecticide.

However it is comparatively non-toxic to mammals and beneficial insects. Only insects that actually ingest the plant material that was treated, such as leaf matter, are affected. Spinosad is partly taken up by leaf tissue and this enhances its effectiveness over time. Dry surface residues do little harm to non-plant feeding insects.

Care must be taken when applying spinosad while honeybees are foraging; after residues dry (a few hours) it is far less toxic to bees .

Spray droplets can also harm Trichogramma wasps and other parasitoids

However, once the deposits dry, they are generally safe for

beneficial insects. So basically, don’t spray when you can see beneficial insect activity. Effects of spinosad on earthworms and soil microorganisms have been investigated in the laboratory. Results indicated that application rates of 25-150 g/ha should not cause significant effect on soil microflora respiration. Earthworms were not very susceptible to spinosad.

There was no evidence of carcinogenicity in two rodent species at any dose tested.

Mutagenic studies showed no mutagenic activity. There were no effects on normal development in rats and rabbits even at the highest dose tested.

Spinosad is principally toxic to plant-eating insects in the orders Lepidoptera (caterpillars), Coleoptera (beetles), Thysanoptera (thrips), and Diptera (flies). It is not a plant systemic, but will penetrate leaves to some extent and therefore has activity against some leafminers. Spinosad is not effective at controlling mites at normal use rates.

10 Poisonous Plants for your Dog

What can I use as mulch ?

Preparing an old garden bed or renewing a vegetable patch

Click here to Download your FREE SECTION Explaining what to plant, Harvest and do in the Vegetable Garden - APRIL